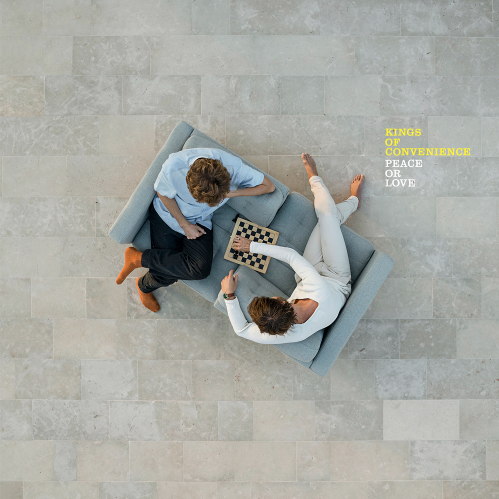 Here we are, it is official and we’re excited to report it. After 12 year, Kings of Convenience announce new album ‘Peace or Love will be out on 18th June!

We already wrote a bit about it but we’re finally able to give you the official news and date.

Returning with their first new music in a decade, Kings of Convenience today announce their forthcoming album. The title is ‘Peace or Love’ and it will be out 18th June on EMI Records.

They’ve already released the first single from the album, ‘Rocky Trail’. The official music video is already online.
The gentle power of ‘Rocky Trail’ makes it clear: the band have lost none of their skill or emotional eloquence since they last recorded together. Lilting acoustic melodies are accompanied by violin and the pair’s distinctive dual-vocal approach to create something both subtle yet evocative. The contemplative lyrics deal with ideas of perception and regret.

“Another classic Eirik composition that skilfully ignores the verse-chorus-verse blueprint” explains Erlend on the origins of the song.  “It’s pop music, but not as we know it”.

About the new album

‘Peace or Love’ is the sound of two old friends exploring the latest phase of their lives together. They found new ways to capture their elusive magic. Recorded across five years in five different cities, the album sounds as fresh as spring. 11 songs about life and love with alluring beauty, purity and emotional clarity. Yes, exactly what you would expect from Kings of Convenience.

Eirik Glambek Bøe and Erlend Øye met at school in Bergen, Norway. They first performed together in the rock band Skog before breaking off and forming a duo in 1999. The pair established themselves as inadvertent trailblazers of a new wave of intimate, acoustic music. They’ve released 3 critically acclaimed albums, toured all around the world and cultivated a dedicated fanbase.

After touring in May in Norway, the band announce their return to British shores with two live shows at the Royal Festival Hall, in London, on the 26th of September 2021 (afternoon matinee and an evening show.)

The other great news is that you can already preorder the album from Say Yes official store, here.

This website uses cookies to improve your experience while you navigate through the website. Out of these, the cookies that are categorized as necessary are stored on your browser as they are essential for the working of basic functionalities of the website. We also use third-party cookies that help us analyze and understand how you use this website. These cookies will be stored in your browser only with your consent. You also have the option to opt-out of these cookies. But opting out of some of these cookies may affect your browsing experience.
Necessary Always Enabled

Any cookies that may not be particularly necessary for the website to function and is used specifically to collect user personal data via analytics, ads, other embedded contents are termed as non-necessary cookies. It is mandatory to procure user consent prior to running these cookies on your website.